WHALES ARGENTINA is located in the eco-tourist town of Puerto Pirámides, at 42º 35’ South, on Península Valdés: the only place in the Argentine Province of Chubut where it is possible to go on whale watching outings on boat. As you will see in the next section, given that Peninsula Valdés is a Protected Natural Area, there is no airport or urban environment close by. The nearest city, 97 km from Puerto Pirámides, is Puerto Madryn.

1. How to get to Puerto Madryn

By aeroplane: you will arrive in the city of Trelew (67km away), whose airport receives daily flights from Buenos Aires and other cities in the Patagonian region. According to the time of the year, there are one or more private jet companies that also service Trelew.
There is another airport located in Puerto Madryn itself: in order to know if it is operating on the date your trip is scheduled, we advise you to ask your airline or send us an e-mail at: info@whalesargentina.com.ar

By land: taking National Route 3.
The bus terminal in Puerto Madryn operates with several different bus companies. One of these companies for example, that runs from Buenos Aires with a coche cama service (fully reclinable seats), is DON OTTO, ANDESMAR. Other companies servicing Puerto Madryn and that leave from different parts across the country, include EL CÓNDOR, VIA BARILOCHE, VIA TAC, TUS and CENTRAL ARGENTINO.

By sea: disembarking at the international port. We would like to point out that the arrival of cruise liners only coincides with the whale season during November and early December.

2. How to get to Puerto Pirámides

Puerto Pirámides is accessed over land, taking Provincial Route 1 and then Provincial Route 2, in direction of Puerto Pirámides. Total distance is 97km over an asphalt route.
Besides driving over in your own or rented car, you have the following options:
a) Hiring a minibus transport or a bus, as part of an excursion.
b) Arranging to travel in remis (private car) or taxi.
c) Buying a regular ticket and travelling on a bus: there is only one company providing this service – “Mar y Valle” (not a tourist-based business)– which departs from the BUS Terminal in Puerto Madryn at 9:30 am, and leaves Puerto Pirámides for the trip back to Puerto Madryn at 6 pm.

If you will not be going in your own vehicle or rented car, we recommend you book these transfers or complete excursions at a travel office, such as:

Regardless of the preferred means of transport, every traveller must pay – in cash – the entry into the Península Valdés Protected Area. The proceeds are used to maintain the Natural Area

3. How to get to Whales Argentina company

If you drive in yourself, immediately after entering Puerto Pirámides, make a right turn on the first road you come across: the road is called “Primera Bajada al Mar”. A few meters along on the right-hand side, you will see – on land – a white two-storey catamaran bearing an orange sign in three languages: that is our office. If you get here by bus, the bus stop is 20 meters down the road before passing our office, (on the left-hand side of the road).

Whale Season: every day from 9 am to 5 pm (sometimes we close later if a sunset outing is scheduled, due to a day’s ideal conditions)

Summer Season (January to March): every day from 9 am to 8 pm 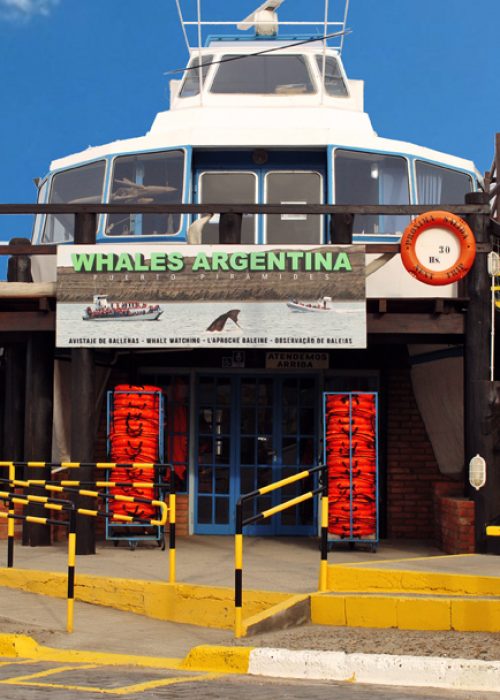 NOTE ON FUEL: If you come by car and after the whale watch are thinking of visiting the rest of Península Valdés, keep in mind that Puerto Pirámides is the only place in the Protected Natural Area where you can refuel.

5. Returning to Puerto Madryn and making the most of "The Doradillo"

After sailing with our company (or on the following day), we strongly recommend that you experience yet another magnificent whale watch – this time along the coastline – in the Municipal Protected Natural Area “EL DORADILLO” (18 km/10 miles north of Puerto Madryn, on Provincial Route 2: 14 km are gravel and 4 km asphalt).

This is a special whale watch, free of charge, as the whales can get as close as 15 m from the shore, due to the pronounced slope of the beach and the depth of the water. WHALES ARGENTINA provides you with the chance to receive a timetable showing high tide hours by e-mail, several months in advance: it is during this type of tide when the whales remain closest to the shore. To request the table containing dates and times, click here.

Patagonia is situated in South America, covering a vast expanse of territory. The larger part of its surface area belongs to Argentina; the smaller part, to Chile. Argentine Patagonia covers an area of approximately 673,000km2 (260,400 square miles). It is divided into three areas: northern, central and southern Patagonia. From north to south, the region begins south of the Pampas and stretches down to the ‘land of fire’, Tierra del Fuego. It is because of its proximity – especially of the southern and Andean area – to Antarctica, that Patagonia’s climate is cold.

Península Valdés can be found in northern Atlantic Patagonia. Its coordinates are: 42°30’ South and 64° West. The bays of both its gulfs – Golfo Nuevo and Golfo San José – are where the largest number of whales is to be found: the whale watching trips take place in Golfo Nuevo.

IMPORTANT NOTICE: Depending on the occasion, the departments of Foreign Affairs may warn their citizens travelling abroad about risks to their safety in certain countries. We wish to point out that our Patagonia is quite a distance away from beautiful and cosmopolitan – although sometimes very “socially mobilized” capital Buenos Aires. Nevertheless, travellers that visit this great city will be sure to have a wonderful stay there by simply taking the precautions advised for all large metropolises. For those travellers from abroad who have never before visited Argentina and/or who don’t know much about our vast geography (eighth-largest country in the world), we provide this table with some of the travel routes along with their distances and/or travel durations

Come and taste the vast Freedom of Atlantic Patagonia and climb aboard this Whale Watching Adventure. Tuning into nature makes for a truly exhilirating travel experience.